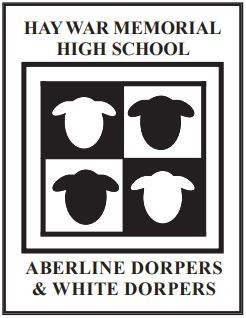 In our first year, stud quality Dorper and White Dorper ewes were donated by top Dorper Studs from all around the country. As well, the ewes had been joined to a Champion Ram from "Dell Dorpers". Our first progeny consisted of ewes and a ram - named "Rambo".

Our students are involved in every aspect of the running of the stud from animal husbandry activities to marketing and handling.

Our team of "Sheep Handlers" closely work with the sheep leading up to major shows. The handlers (students) have shown the sheep at local, state and interstate competitions including the Australian Sheep and Wool Show in Bendigo, The Royal Melbourne Show, the National Dorper Sheep Show in Dubbo and The Sydney Royal Easter Show.

The stud name "Aberline" was selected by students as it honours the War Memorial aspect of our school. Aberline is the first name on the list of Hay soldiers who lost their lives during the Boer War in South Africa. The Dorper breed originates from South Africa.

Return to top of page

We would like to pay our respects and acknowledge the traditional custodians of the land and also pay respect to Elders both past and present.

Copyright for this website is owned by the State of New South Wales through the Department of Education. For more information go to http://www.dec.nsw.gov.au/footer/copyright.